The XR Podcast is the place to explore realities. Learn how to create reality and simulations with modern software. Understand the nature of reality with thought provoking interviews. XRPodcast.com
Each episode is a long format discussion similar to Voices of VR Podcast and others like Joe Rogan. 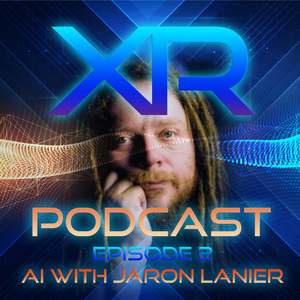 In this episode we hear from Jaron Lanier at his Tribeca Film Festival Talk. He discusses the implications of AI to our reality and social paradigms. We also cover other relevant topics like Jamie Metzl's book Hacking Darwin and MIT researcher Lex Freidmen's work in autonomous vehicles. This Episode is brought to you by: VRTO - Virtual & Augmented Reality World Conference & Expo. Returns for its 4th year, June 1-3 to Toronto, Canada.

Known for its thematic flow and unusual subject matter, this intimate symposium welcomes speakers from Intel Studios and Ubisoft to best-selling authors, and indie VR game developers. The stage will be set with change-agents, mavericks and thought leaders. VRTO explores everything from volumetric capture to eSports, surgery to interactive storytelling, and if you’re interested in how technology, culture, industry, and arts are coalescing and advancing, VRTO is a conference not to be missed.